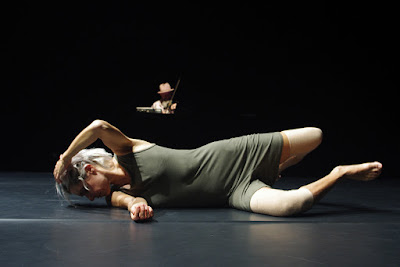 The sinking of the body into the abyssal void of the present.

VERBO PRESENTE was created reflecting on perception, imagination and their connection and interdependence, and on subjectivity counterposed to objectivity.

The cause for reflection was a question: does the verbal description of some postures and movements of a body make universal the vision of that body?

I chose some paintings by Andrea Chiesi, his human figures. I chose them because of their blindness, because of absence of expression of their faces - absence, not negation; this absence becomes presence thanks to the shapes of those bodies. Then I transposed these postures on my body, I verbal described them and recorded my voice. I left a hole, a silence between one posture description and the other one; I created a choreography for those holes, choreography inspired by literary and scientific images concerning blindness.

The space was marked by analysis of The triumph of death by Pieter Bruegel the Elder. I reflected on how the painter defined and divided the space in that painting. That space - marked by the unavoidable way of death, by its victory in the battle against life - showed the directions and the spatial coordinates of the choreography.

This was the course of my research on perception and imagination.
But what is the imagination if not the action of the image, the movement acted in us by experienced image?
Spectator’ sight will create the whole vision, as the final and necessary tessera that devise the entirety of the choreographic action.
paola bianchi


a review by Enrico Pastore