An autistic monologue in two parts. A mute dialogue, sometimes deaf, between the body and its image.
The journey of a body, of its shadow, the trajectory of the dissolution of the shadow and the fall of the body into a naked, unveiled space; hanging in pure time which is taken away from temporality. A lonely body. Ensnared in the black. Doomed to a double glance. Monstrously reflected, perpetually searching for other than the self.
I am the unveiled donkey that carries the weight of the inability caused by the excess of light.

The inception of DUPLICA was a desire to experiment with the world of shadow and light by using the body, my own body. A sense of insecurity has been leading most of the process. I didn’t know neither where I would arrive nor what I would find. Contradictions alternated with failures and pressing questions about the meaning. I chose not to put up a fight against it, so uncertainty has become a crucial element of the choreography.
The dramaturgy of the piece rose from the experiments I conducted on the relationship between light, the body and its shadow. A dramaturgy which is visually summarized by two parallel lines that will never touch each other, but need each other to exist – the outline of the figure and the one of its shadow, both inevitably killed by their separation.

Black on black.
The body’s consciousness stops its being “protaonist” in order to give way to the projection itself. Shadows need attention and extreme control. They imply a continuous giving where non-visible gestures take place according to the shape and cleanness of the shadow itself. The projection of the image becomes a place outside itself, attention oversteps the body and crashes in a flat, vertical space; three-dimensionality vanishes while the shadow relentlessly reveals.
The choice of a black cloth - in contrast with the traditional white cloths used in shadow plays – gives the possibility to see both the shadow and the body at the same time, while creating a continuous dialogue between the “carnality” and the flattening, a dialogue that implies a double consciousness: the outer attention – represented by the shadow on the cloth - and the focus on ourselves – represented by the real body. I needed to experience this kind of double consciousness by refusing the extreme protection of the white.

DUPLICA from paola bianchi on Vimeo. 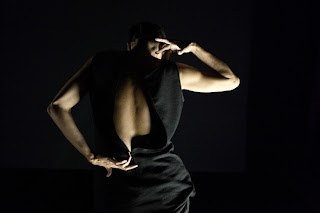 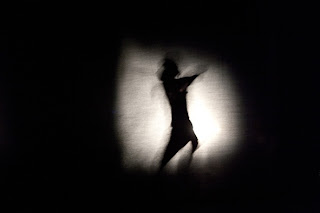 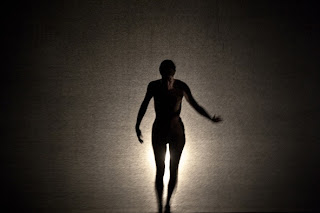 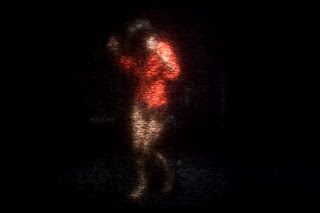